"Hey. Reader," I say, in a soft, subtle voice. "Hey. Author." You respond, in the same soothing, inside voice. "What's up?" You continue. "Oh nothing much, just got a cool article for you today," I explain, wiping my uncomfortably sweaty palms together in anticipation, almost using my outside, recess voice, yet still in a tone that a child could fall asleep to. "Please, check it out."

Okay turns out my palms weren't sweaty, they were covered in crane spit, and you know what that means, we got a spitting contest here today boys, so rev up those horses of yours and zoom on over here, it's dinner and a show, all for the cheap cost of free


BOOM
Here they are
The twin pillars of beauty and grace
Winthrow and Axel, both contesting for the other's territory

Winthrow: Has had years of formal spitting training and is ready to dominate. He is highborn by birth and cannot proceed into his Lordship until he has vanquished another foe and obtained his land for his father's kingdom. He comes out on the field cocky and confident, but is he too confident?

Axel: Is no highborn lord and has no formal training but has spent his entire life preparing for this moment, to protect his homeland from the would-be-tyrant named Winthrow. The true underdog of this match, but will Winthrow underestimate him enough for Axel to win?

Let's Watch
What the fuck!? What in the h-e-double hockey sticks!? These cranes are out here spitting! Look at that arc made by Winthrow above, the position of his neck, this man isn't going for length he's going for grace, beauty, and a supple stream of delicious saliva. Axel waits for his turn patiently, certain that all his training will pay off, but will it? 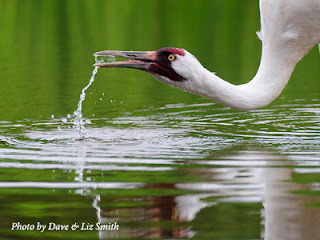 Oooooohhhh, tough break, sorry dude. Just not very great over all, short stream, low to the water, not a very delectable arc, I'm sorry Axel, Winthrow just has this one.

WHY WHY WHY
At this point, you may be asking yourself, "Why?" and you're really pretty unoriginal to ask that question, so many people have asked that before, and I wish you would think of a different question. And yet here I am, feeling implored to answer you. So here we go, because you're so interested in the reasoning that birds have to take part in their natural nature. Like an idiot. They just do things. They're birds. Do they really need reasons in their tiny heads to do things?  I think not. Reasons is just a word that lazy people use when they don't want to say "I can't comprehend that some things just happen for no reason." So anyway:

The Reasons
Many birds have many different reasons for spitting contests. Almost all the time it's an evolutionary check that developed after every bird ever got cotton mouth. They just want to make sure it isn't happening again. When it isn't that, it's for territory, or female birds, just like humans who like to see who has the most money. The only bird that does not follow this trend is the Cardinal. The cardinals mostly use spitting contests to see who gets to make a wish on Thanksgiving (a wishbone would be too morbid for our aviary friends) (poor Jeffery was in the bathroom last Thanksgiving and missed the contest, and what a shame, he probably would have won too).

Now that you know the reasons, I hope you can think of better questions to ask next time, and that you also don't go around spitting everywhere. If you have made it this far, I'd like to thank you for sticking with The Bird Inspector, and also to keep an eye out for our new website that will be coming soon. Also I'm sorry if this article comes to you in the form of charcoal scribbling on some toilet paper, I'm writing this in the middle of my siege against the Bird Maker. Wish me luck, and have a great Tuesday!