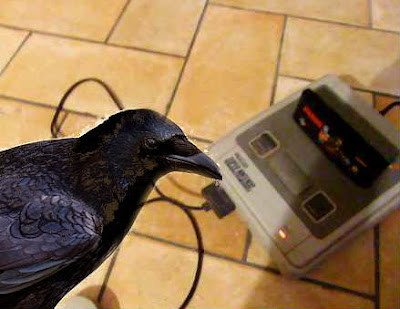 Hello, Reader. This week the BirdInspector received a call from a man named Brian Fletcher with some breaking news. We don't receive may calls, so you know I headed over right away. As soon as I arrived a very old woman answered the door, she seemed confused about who I was and clearly didn't speak very good English. This is when I realized I was probably at the wrong house. A voice, like the one that called me on the phone, hollered at me from the next house over. This confirmed my theory. I gave the woman the $2.14 in my pocket for her troubles. Mr, Fletcher invited me into his home, and I don't like admitting this Reader, but as a reporter it is my duty to spare no details. I stole a couple Nilla Wafers from his pantry. They just looked so good, Reader. I couldn't help myself. Anyway Mr. Fletcher proceeded to take me to his basement. After I pass through the door's threshold he told me to quickly close the door.
"I wouldn't want them to get out." he said. At this point, Reader, I was fearing for my life. Had I gone too far to get the latest scoop? Did I even care if this man kept me locked in his basement? Would this be the poetic ending BirdInspector needs? As all these questions were running through my head, Mr. Fletcher flipped on the light switch and that's when I saw it: four birds sitting around a Super Nintendo playing Super Mario Brothers 3.
This is where the story gets interesting, Reader. Mr. Fletcher informed me that his family has kept these birds in their basement and have been selectively breeding them to be better and better at playing games since the 50's. Back then it was just things like Candy Land and the occasional game of Scrabble, until Mr. Fletcher's father bought a Super Nintendo to start training the birds on.
It wasn't until the tragic death of his father in 1993 that the family couldn't afford to buy new systems for the birds to play on anymore, so since Super Mario Bro 3's release earlier that year these birds have been doing three things: training, breeding, and evolving.
Let me be the first one to tell you, Reader, these birds seriously kick some ass at this game. Like they are better than any human being can ever hope to be. They know it backwards and forwards. Every enemy, every jump, every secret. I was speechless.
After hanging out and beating a couple worlds with them I feel comfortable saying that they were actually pretty laid back dudes. I clearly wasn't as good as them, but they were totally cool about it.