Hello, Reader! Welcome back to your probably annual visit to this godforsaken blog! Do I have another article for you today? Boy, do I! And if my last articles made you want to burn all your money and destroy all your assets in search of any God to save you, for there are none in this hell of a website, just you wait to see what this week's article has in store!

As I'm sure you can guess from the title, I'm here this week to give you the rundown on what's happening with birds this year. I've got new releases, updates, and even a few cancellations that are confirmed for either this month or later in the year, with included concept art from our artists here at Bird Inspector for the new releases. And it will be in the form of a list because I have lost my grip on reality and want to make a list, take it or leave it.


New Releases
Scientific Name: transvolans et passer griseo
Mass: 1.3-1.5 oz
Conservation Status: No concern
Family: passeridae
Class: Aves
The Rocky Mountain Grey Sparrow is a brand new release that has been in the works for a while, and it seems that all the kinks have been worked out and is finally fit to be seen starting March 27 of this year, of course mainly in the Rocky Mountain region and will be lightly speckled into other similar mountain ranges.

Scientific Name: noctis avem
Mass: .07-.13 oz
Conservation Status: No concern
Family: trochilidae
Class: of 2031, Graduates College in 2035
The Brown Tailed Night Bird is a new variation of humming bird, from the same family (trochilidae), and is very similar to preexisting humming birds in its size, weight, diet, and tendencies, however, this bird will attend school. Starting in the fall of this year, these birds will be seen year round on school grounds and college campuses.

Cancellations
The following birds will cease to exist, effective April 30, 2019;


Here are all the updates and new systems to be presented in preexisting birds, effective March 20 2019;

- One in every 326 has one blue feather that will be worth $27 USD once the market is arranged for it
- Each have three extra eyes in various places of their body (most common is on the forehead, stomach (internal), and stomach (external))
- Has gained the ability to climb
- Are revoked as members at the Greenwood Country Club in South Carolina
- Have become two times larger
- Are no longer considered as a part of the corvidae family
- Are part of a brand new family, simply labeled "crow"
- Have gained the ability to say 'fuck'
- Can no longer crow
- Become invisible at night
- Can now stand under/next to motor vehicles for prolonged periods of time
- Can no longer see trees from 12:00 pm- 1:00 pm
- Now lose all their feathers for the subsequent 1:00 pm- 2:00 pm
- Hailie no longer likes crows
- Know how to read (but won't)
- Crows in a group are now endearingly called 'group o' crows' as opposed to a 'murder'
- Are now strictly carnivores
- Can feel guilt
- Cannot digest humans under the age of 5
- Can now run DOOM if hooked up correctly
- Have lost their faith (this isn't anything to do with Bird Inspector's updates, this is their own thing)
- Know for a fact that you aren't reading all of this
- Have become that much more intelligent
- Legs are now twice as long
- Legs have thousands of bones, making them extremely flexible
- Have grown talons the size of swords
- Have grown very fond of swords
- No longer know how to open doors
- Have gained the ability to phase through garage doors
- Have lost the ability to migrate
- Must lose, and subsequently replace, their wings after 10,000 flaps
- Can now legally be called 'little johns' or 'wistful spirits'
- Must legally be seen at least twice a day by every human being
- Have an increased sex drive
- Wings are now located on the tail rather than the back
- Have gained the ability to write
- Know how to read the first letter of every line
- Know how to fool you
- May have taken over Bird Inspector
- Have had the cops called on them
- Are now either fleeing or being arrested
- Have given themselves their own updates
- Know I don't know how to read or backspace
- Have been eradicated from the premises
- Are now angry
- Will be back
- Now have mustaches respective to their given gender
- Are no longer dope
- Can now live up to 58.923 years
- Now only symbolize death, rather than bad luck and death
- Now remember people they have never seen
- Will hold grudges for things you will do in the future
- Are now no longer related to ravens, as they are no longer in the corvidae family
- Can now experience teenage angst from ages 11-17
- Still have funerals, but each dead crow must now be buried in a coffin of marbled pine and mahogany
- Have lost the ability to cause blackouts on purpose, but may still on accident
- Have accents inversely respective to the countries they are found in
- Are color blind
- Have developed a complex diet shown below with a list of the genera for reference; 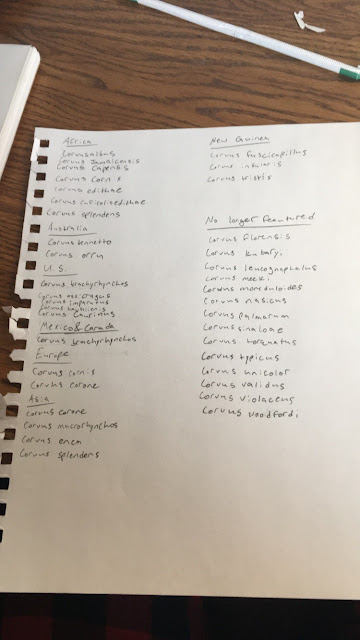 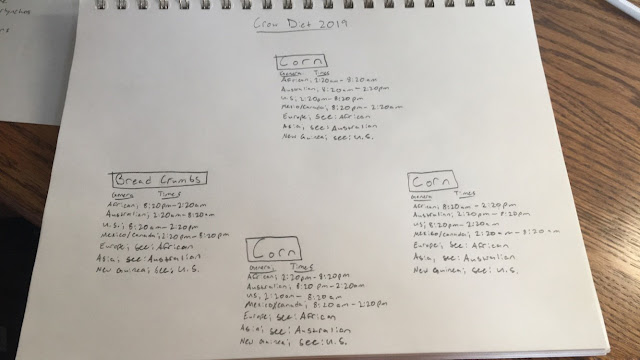 - Are legally allowed to become carpenters for payment
- Have an increased sense of team work
- Have lost all impulse control
- Have lost all object permanence
- Scientific name of the Little Crow has been changed from corvus bennetti to corvus bennetto
- Can (and almost certainly will) scare farmers
- Are expressly more scared of scarecrows
- Will now be know as scarycrows throughout the Midwest and surrounding counties
- Can now deal (and take) psychic and lightning damage
- Two crows will be chosen to receive the word of god
- These two will always disagree about what the word of god is trying to tell them
- Current methods of controlling crow problems are irrelevant (save for scarecrows)
- As they were once the hunted, they have now become the hunters of the Curonian tribe
- Will become increasingly tie dyed respective to the amount of lambs they kill
- Will attack anything and everything sporting tie dye
- Can now be video recorded without interference from the Somali Government
- Can be taken as prisoners of war
- Will be taken as prisoners of war
- Can take prisoners of war themselves
- Will show allegiance to their respective countries in the case of WWIII
- Can be seen fraternizing with crabs
- Have ridiculously extreme opinions on crustaceans and will act on them
- Are no longer part of the animalia kingdom
- Are part of a new kingdom labeled 'Kingdom of the Crow Rule'
- Have a King Crow
- Will not listen to anything King Crow will say
- Are petitioning against King Crow
- Along with the Hawaiian Crow and the Mariana Crow, the Bismarck Crow is also now on the endangered species list (congrats, you made it!)
- Hunting of crows is now completely legal
- Hunting season is not needed to hunt crows
- Hunting of crows is strongly encouraged
- Don't want to be hunted and will stop you at any cost
- Please hunt the crows
-  Have the ability to reproduce like rats
- Choose not to
- Will reproduce like rats if not given what they want
- Understand monetary values
- Will steal from your selfish grandparents who gave you $5 for your 21st birthday even though you know they both make 6 figures a year
- Will give you what they stole from your selfish grandparents who gave you $5 for your 21st birthday even though you know they both make 6 figures a year
- Cannot become confused
- Will become alcoholics if their life has become stressful
- Are pissed that they have come home after a long day at work and their teenage crow children have been playing with shiny coins all day instead of taking the chicken out of the freezer
- Are now almost certainly harbingers of precipitation of any kind
- Can now legally rent a hotel room for up to 3 nights if they are of age
- Can be attracted by promises of love
- Can get a divorce with reasonable explanation, but one Canadian government official must die
- Must not be worshiped
- Will get into your house so that you can worship them without being seen by authorities
- Now require you leave your fireplace open so they can enter your home at will
- Want to enter your home
- Know how to enter your home
- Will enter your home
- Are already in your home
- Sie wissen Deutsch
- Sie dachten ins Deutsch
- Sie hat keine Konzept von anderen Sprache
- All of them think they're the only one that knows German
- They don't want to be different than the whole
- They cannot speak German so this is irrelevant
- Understand strength in numbers
- Are now superior in combat to hermit crabs
- Now know everything there is to know about the Bird King's dungeon
- Can rescue prisoners from the dungeon
- Know it is not their place to interfere with the actions of the Bird King
- Have no fear of you, regardless of the fear you (should) have for them
- Wear sunglasses
- Have a License to Kill
- Are now systematic
- Are now hydromatic
- Are now ultramatic
- Why, they are now Greased Lightning!
- Can communicate in braille

Thank you for sticking through this article, I know it was more informative than entertaining as opposed to my previous articles, but it is my duty as a bird enthusiast to make sure everyone knows about the changes that will be coming for our avian friends this year. An update on my war with the Bird Maker; I have almost reached him, I should be at the threshold of victory next week, and bring justice to all birds and people in this world. I feel like I should say thank you again, but actually I should say 'you're welcome' for informing and preparing you. So, you're welcome, Reader, and I'll see you again next week!