The Nature And Habits Of The Red Winged Black Bird

Hello Reader! Today, we will be talking about the Red Winged Black Birds, and let me say just how excited I am. The answer is very. These Birds not only have red wings, but are also black birds! How cool! And this isn't the only thing that rules about them, no reader, these birds are just wonderful all around, and I would love to take you through the intricacies of their habits from day to day life! 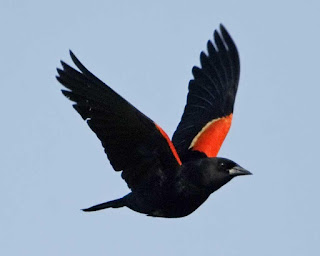 Eytmology
This bird, aptly named the Red Winged Black Bird, derives its name from the tips of their wings near the shoulders that are red. The etymology of each of these words is listed below.
Habits/Interaction With Humans
These birds are actually quite kind and calm, especially where humans are involved. But before we get into that, let's talk about their actions in day to day life. Wikipedia tells me that the noises they makes range from and sweet 'terrr-eeee' to a beuatiful 'oak-a-lee' to even a slightly more harsh 'ooPREEEEom'. Reader, this means nothing to me.
These birds will eat just anything put in front of them! since they are omnivores, they will literally just eat whatever the fuck. This makes them very useful to criminals, which we will talk about later. But yeah, in the wild outback of northern Indiana, these birds will snack on the most tropical of meals, ranging from various kinds of beetles to left over fried chicken from Martins. truly the most impeccable hunters. 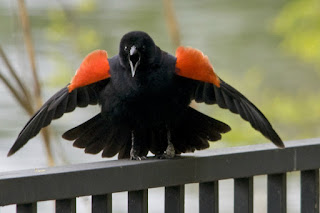 I will not talk about breeding! Gross!
These birds are very territorial creatures, meaning, they will walk outside to their neighbors with a ruler and make sure they are not on their property, and they will oblige, because he has a ruler he obviously knows what the hell he's talking about. If they are on his property, he will make them apologize, and promptly eat them.
These birds interact with us (humans) every day and are frankly very kind and helpful. Even with criminals, these birds have been adored by humans since the beginning. Why do you think Pablo Escobar was so elusive? He had so much help from his pet Red Winged Black Bird, Crowcaine. Other than that, Red Winged Black Birds are actually adored by humans everywhere. They are loyal to anyone who helps them and have even been seen helping children study for math tests.

Red Winged Black Birds have (rarely) been seen attacking humans, but that is only because these specific humans were born and raised to spite their existence and are constantly being rude and oppressing these birds for no reason. Shame.